Kudos to the folks at Public Safety Canada for compiling a concise report entitled Mitigation Techniques for Advanced Persistent Threats. They helpfully deconstruct APT by offering a practical, consumable interpretation of each term.

The context for Advanced, for example, is further broken down into sub-contexts. The Report explains that malicious software is not always advanced in the sense that it is "sophisticated" but that it is often readily available exploit code that is simply better leveraged than earlier attacks. Advanced applies more to the growing body of evidence that indicates that state actors and sponsors "select their targets and refine the attack such that selected individuals in targeted organizations become the conduit to the organization's information assets".

The context for Persistent is also broken into aspects. The reconaissance aspects is a panoply of P's: the attackers are patient, painstaking, precise, purposeful, and persevering. The execution aspect of a APTs is very "spy" oriented: clandestine and credibly socially engineered.

The threat is simple: exfiltration of information of a sensitive or secret nature that provides an APT sponsor with "a strategic, diplomatic, military, competitive, technological or economic advantage."

Most online resources I've found stop here (feel free to recommend any in a comment). This Report goes on to explain the chronology of an APT attack, describing each stage - reconaissance, social engineering, establishing backdoor and C&C, achieving the objective, and maintaining presence. This chronology is a great segue to the remainder of the Report because it gives context for the strategies Public Safety Canada recommends that potential target organizations should take, how to monitor for and detect potential APT activity, and mitigation measures.

The information Public Safety Canada shares in these sections is not radically new; in fact, there isn't a single monitoring, detection, mitigation or remediation measure that hasn't been recommended before. The value of these sections, however, is twofold: first, Public Safety Canada's taken the initiative to gather this information from reputable sources (Aus DSD, McAfee, RSA, GAIC...), consider the growing body of work, and then condense the information into a single reference. More importantly, by creating a single reference, it allows us to realize that defending against APTs is as much a matter of doing better what we do today, with existing instrumentation, as it is introducing new techniques or technology.

I'm always excited to share when I find a resource that is FUD free and full of useful information. This Report doesn't contain a silver bullet, but it will lend clarity to APT discussions and it may help you define a better strategy for defending against APTs than you have today.

Foreign language spam is a problem everyone shares, not just folks who read English. If you don't understand a language, and can't read the characters of the script used, you probably won't get much value from messages you receive. Worse, you won't understand the "text" of the links embedded in the message.

Common sense would dictate that you don't click on something you can't read but decades of evidence proves otherwise.  A practical solution to foreign language spam is to prevent it from appearing in your In Box.

If you are an Apple Mail (Mail.app) user, and your organization isn't filtering foreign languages at a mail server or antispam gateway, you'll find that filtering foreign spam is problematic for several reasons. First, there are thousands of languages. Many of these can be written using characters from one or more scripts and many of these can be encoded using  one of (again) many character sets. I receive mail daily composed using Arabic, Chinese, Russian, Japanese, and Korean. Examining the raw source email  From: and Subject: headers of these messages reveals they are encoded using UTF-8, windows-1251, GB18030 iso-2022-jp, KOI8-R, respectively. Filtering based on  these encodings alone is a messy Mail Rule.

Filtering based on the "language" found in email messages has similar scaling and messiness issues. The problem is compounded by the fact that email messages encoded to support languages that are not represented using 7 bit ASCII can also have multiple body "parts" (as well as attachments) . Body parts are typically distinguished and bounded by the use of Content-Type: headers. Apple's Mail.app seems to examine only the first encountered of this header type, which is often (perhaps intentionally by spammers) multipart/alternative or multipart/mixed so a rule that is supposed to filter  text/plain; charset="windows-1251" as junk will fail to match.

I found a solution at Buzzdroid that works on the principle that certain words (of, the, and, is, a) are found in nearly any rationally composed English message body. Buzzdroi'ds logic is straightforward: if these words are not present, the message is probably not "readable English". A Mail Rule of this kind looks like this: 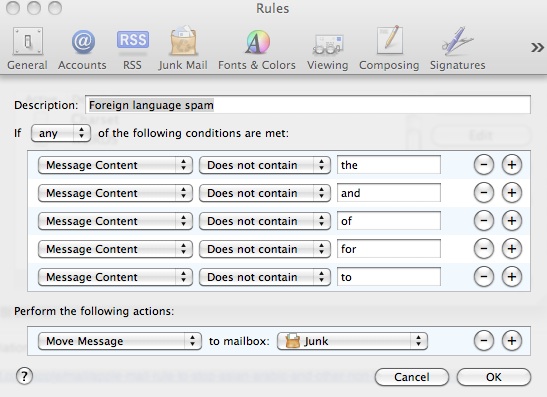 My variation to this theme (below) is working well, as the Junk folder illustrates:

This is an imperfect solution to be sure. For example, Exchange Calendar invitations match the rule. Tempting...  I created an exception rule "Calendar" and made certain the rule preceded the Foreign Language Spam rule.  Occasionally I receive email composed as if it were a text or Tweet and for these, I may whitelist the sender. After 10 days of testing, I'm happier with a 1 in 10 false positive in my Junk folder than the distraction of messages I cannot read in my In Box.

As the Buzzdroid folks say, "Any Apple Mail Rule should only be the last line of defense against spam." This problem can be handled at mail servers or antispam gateways but there is an administrative cost for organizations with language diversity: while it might serve me to block all languages that do not use characters from Latin alphabets, many of my colleagues would be inconvenienced.

I'm curious to hear from others whether a similar approach would work for other languages. If you come up with an Arabic, Chinese, Japanese, Korean, or Russian "only" Rule for Mail.app, let me know.

« Previous
Find me on Mastodon and Facebook
Tweets by @securityskeptic