Is it Spam? This week in Amazon Credit Card Rewards Scams 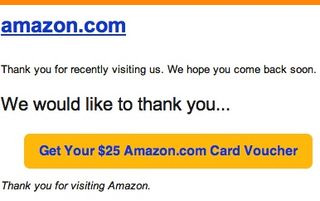 Many brands offer credit card rewards programs. This week's "Is it spam?" features a spampaign that attempts to attract mail recipients by offering them a reward or card voucher if they visit Amazon. These emails appear to be variants of a earlier phishing attack that seek to extract personal or account information when you visit the link.

An Amazon.com thank you 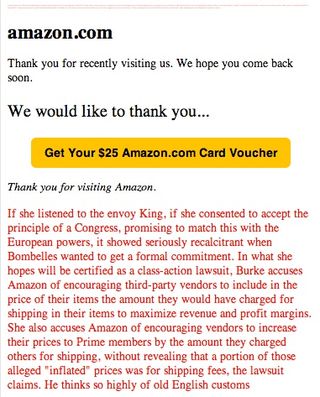 In our last "Is it Spam?" post, we looked at a blundered attempt to use hidden text to poison Bayesian filtering. This week's spammers managed to get set HTML font and background colors correctly to hide text. Spam investigators discover this by examining the raw or source email. You can see this source in most email clients. Gmail users, for example, can select "Show original" from a pulldown menu when they view a message: 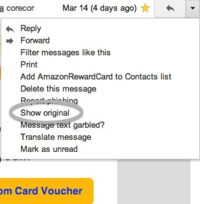 By opening the source email and stripping colors we can see the text that's hidden here to poison filters. I've set the text color to red for illustration purposes. If you are keen of sight, you may notice some tiny red at the top of the message: this is poisoning text as well, but for some reason (overkill?), the font size is set to 2 point.

I'd like to thank this and last week's phishers for providing teaching moments in such proximity. Hidden text, blundered or not, is a tell tale of a spam or a phish. As always, you are most safe when you STOP. THINK. CONNECT.

An incoming call from Edward Snowden, cyberattacks against Ukraine, iOS 7.1 patches for Webkit and malicious apps, selling student personal data, and a WhatsApp mishap are among this weeks top #infosec reads.

Edward Snowden, exiled former CIA contractor, showed up at the South by South West conference Monday via Google hangouts. In front of a crowd of 3,500, he stressed that he acted in the interest of national security, and advocated the importance of encryption in light of the new evidence of the NSA's cyber-surveillance.

As a follow-up to the takeover of Crimea by unidentified troops in unmarked uniforms, Ukraine is now reporting a variety of cyberattacks on their government's computer networks. SC Magazine UK quotes Dr Thomas Rid, Reader in War Studies, Kings College London as saying “Russia is the suspect for both the physical and cyber-attacks, but there is no concrete evidence to support the suspicions.”

Apple's iOS 7.1 release fixes at least 41 bugs, including 19 in Webkit. Some of the vulnerabilities resolved mitigate attacks from malicious apps, as well as a MITM that tricked users into downloading malicious apps via Enterprise App Download.

The Guardian alleges that the UK Universities and Colleges Admission Service sold personal data of one million students and parents to mobile phone operators O2 and Vodafone, Microsoft and Red Bull. A “commercial arm” of UCAS earned £millions from sharing emails and addresses. UCAS claims its data collection and “opt out” opportunity comply with the laws. privacy lobby group Big Brother Watch concedes but claims their methods are underhanded.

WhatsApp, recently acquired by Facebook, is reported to save on the users' SD card in their phone. Any Android application can read the SD card if the user allows access to it. Because of this, private messages on the SD card can be accessed by developers of any Android app, not just WhatsApp, so long as they have the user's permission to access the SD card.