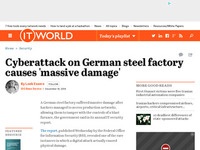 This attack against a steel factory in Germany is frightening. The attackers reportedly gained access first to an office network via a targeted or "spear" phish and from this lauch point, to a production network, where they caused compromised systems to fail. These failures reportedly interfered with the normal, "controlled" shutdown of a blast furnace which caused “massive damage to the plant".

This is a sobering example of just how extensive the damage from a targeted "spear phish" can be. Pre-911, I consulted for a F500 corporation on risk mitigation resulting from attacks against process control systems. One of the risks that we had identified at that time was the possibility that malicious, criminal, terrorist, or disgruntled insider actors could (remotely) gain access to systems that monitored or controlled manufacture and cause them to fail/overheat/explode. It's not at all comforting to read about an attack that's frighteningly similar to what we were then modeling as hypothetical.

Spearphishing poses serious risks for any organization, large or small.  It's hard or impossible for the average worker to imagine his corporate email can be used as a catalyst for (environmental) damage, systemic failure, injury or loss of life. Unfortunately, there's growing evidence that no one - in any organization - can afford be dismissive or ignore the spear phishing threat.
To shore up your organization's spear phishing defenses,
Be - and think - safe this holiday season and throughout the New Year.

Posted at 10:48 AM in Anti-Malware and Anti-phishing | Permalink