Vulnerability investigators and exploit kit developers are exposing critical flaws in secure communications protocols at an alarming rate  in 2015. GHOST, JASBUG, FREAK, and VENOM all reveal flaws in protocols that employ TLS. Weakdh.org has identified yet another vulnerability, Logjam, which takes advantage of weaknesses in Diffie-Hellman key exchange implementations. These force a downgrade of negotiated encryption to 512-bit export grade, which can be defeated in a man-in-the-middle attack to allow passive eavesdropping. The investigators suggest that such MITMs could be used to support state actor surveillance as well as criminal activities. A detailed report,  Imperfect Forward Secrecy: How Diffie-Hellman Fails in Practice is available from weakdh.org.

Storm Kit - Changing the rules of the DDoS attack

Malware isn't only about viruses: companies preinstall it all the time

Richard Stallman is exorcised over the widespread abuse he sees in software that embeds functionality that does not benefit users but exposes them to disclosure of personal information without notice or consent or otherwise mistreats users. I agree with Richard but I'd prefer that we refer to this 'ware as abuseware so that we can at least attempt to distinguish criminal activity from infuriating-close-to-criminal activity. I also love Richard's missive to us all:

"Individually, by rejecting proprietary software and web services
that snoop or track.

"Collectively, by organising to develop free/libre replacement systems and web services that don’t track who uses them.

"Democratically, by legislation to criminalise various sorts of malware practices. This presupposes democracy, and democracy requires defeating treaties such as the TPP and TTIP that give companies the power to suppress democracy." 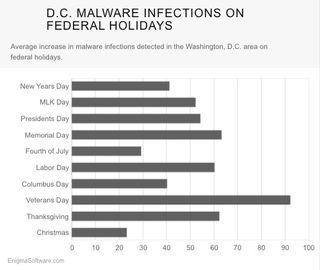 Malware infections increased nearly 51% on Memorial Day in Washington, DC.  As this graphic from Federal Times illustrates, this statistic is an outlier among the already dramatic uptick in infection rates on US holidays in general. Enigma Software bases these findings using infections detected by their consumer security suite software, which is not used in government systems.  A lesson from this report? Relax during your holiday time off but remain diligent to avoid being phished or infected.

The US Senate voted down USA Freedom Act. Barring (un)heroic efforts by supporters like Mitch McConnell, it is likely that many Patriot Act powers will automatically expire on June 1. How unpopular had the US Freedom Act become? Imagine any other issue where the American Civil Liberties Union (ACLU) and the Tea Party Patriots would cooperate to create a TV advertisement, warning Americans, They've gone too far!

Posted at 11:17 AM in Music, Top Infosec Reads | Permalink